The 9th Tianjin Private Enterprise "Healthy Growth Project" conference was held in Tianjin. The conference was co-hosted by Tianjin Federation of Industry and Commerce, Haihe Media Center, and Tianjin Financial Investment Chamber of Commerce. With its excellent R&D capabilities, cashway was once again shortlisted for the top 100 technological innovation companies and ranked among the top three seats. The company’s party committee secretary and chairman Jiang Haoran took the stage to accept the award on behalf of the company. 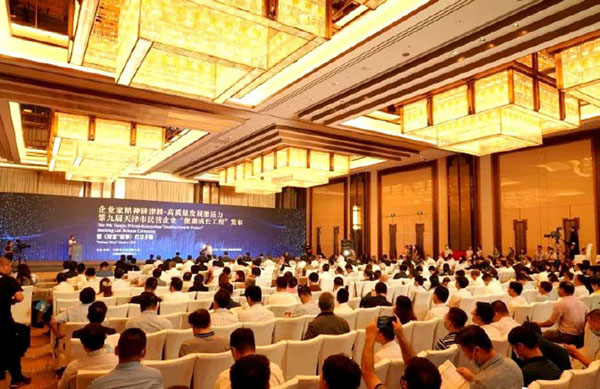 The "Healthy Growth Project" for private enterprises in Tianjin aims to thoroughly implement the socialist ideology with Chinese characteristics in the new era of Jinping and the spirit of the 19th CPC National Congress, demonstrate the achievements and contributions of Tianjin's private economy, vigorously promote entrepreneurship, and stimulate the vitality of private enterprises. Promote the high-quality development of the private economy.

Leaders such as Ji Guoqiang, member of the Standing Committee of the Tianjin Municipal Party Committee and Minister of the United Front Work Department, Li Changjin, Vice Chairman of the All-China Federation of Industry and Commerce, Vice Chairman of the Tianjin Political Consultative Conference, and Chairman of the Municipal Federation of Industry and Commerce attended the meeting and delivered speeches. On behalf of the municipal party committee, Ji Guoqiang first expressed his warm congratulations to the companies on the list. He asked all relevant departments to firmly establish the concept of "industry first, entrepreneurial boss", continue to optimize the business environment of our city, and respect, equality, and sincerely serve all enterprises. Work. The Municipal Federation of Industry and Commerce should take the "Healthy Growth Project" as the starting point, continuously strengthen ideological and political guidance and policy publicity, close the connection between government and enterprises, create a "home of private economic people", and jointly promote the high-quality development of our private economy.

As a listed company on the main board of financial technology in Tianjin, Cashway Technology has always insisted on independent innovation. Its annual R&D investment has been maintained at more than 8% of its operating income. It has gradually applied for patents and has over 1,000 software copyrights. It has mastered many key core technologies. Realize the security and control of the financial self-service field.